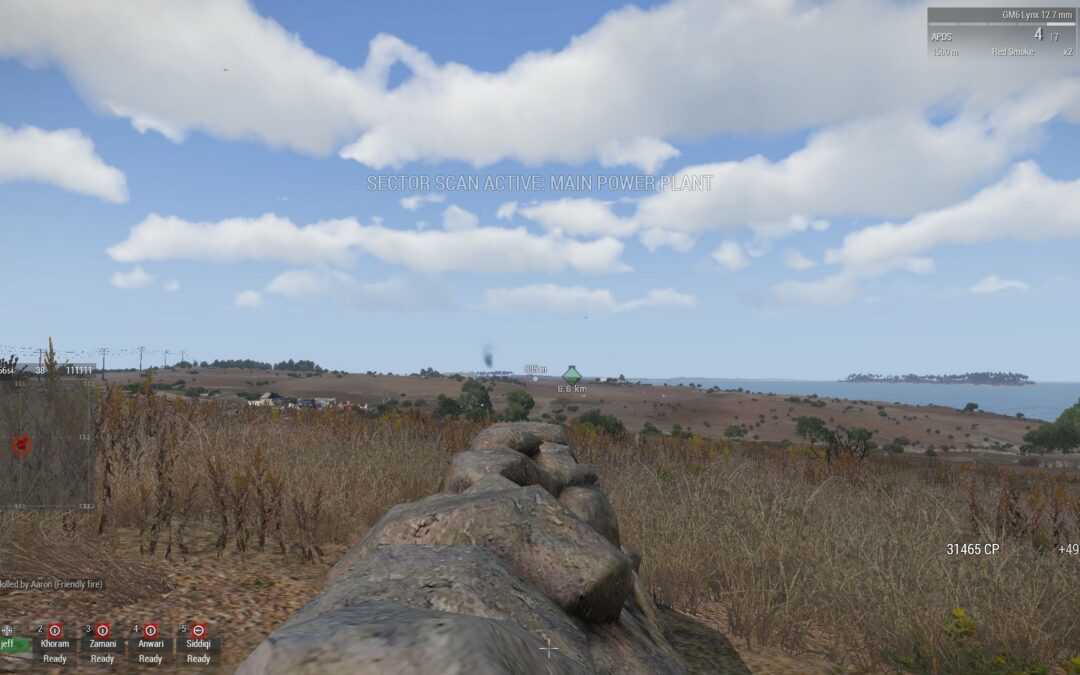 Operating a campaign to prevent or end enemy air power is an extremely effective way to help your team win. The team with air superiority keeps airplanes and tanks longer resulting in faster sector taking and more efficient use of Command Points. Done right, the player camping AAC Airfield will also cause strong BLUFOR players (those with the experience to be pilots and SpecOps) to waste a large amount of Command Points on airplanes and helicopters that get destroyed.

The outcomes of successful SpecOps at AAC Airfield are:

As with any operation behind enemy lines the most important goal is to stay alive so that you can get the most out of the effort of getting there. It generally gets harder to get behind lines as the game progresses.

Moving a player behind enemy lines is an expense for the team. Expenses include:

There are several location options for camping AAC Airfield and each has strengths and weaknesses.

Locations I consider are:

North of The Airfield

South of The Airfield

You might consider the following when choosing the makeup and gear of your squad:

Once you have considered these and chosen the squad makeup you want to operate with, here are some ideas:

Once you are at the area of operations your goals are:

I start by placing everyone on Hold Fire, get them positioned where I want them, and Mark the map with their position/number so I can remember who is where.

Next I command the engagement direction (engage), level of awareness (typically to Combat), and stance.

Finally I set a single AA soldier to Open Fire so that air assets will be engaged and I get in position to fire as well.

Air assets are more valuable once they take off because they have players and AI in them. As long as you can take one down on takeoff, shoot on takeoff.

Whenever I take a shot I move, but u generally do not move AI ok every shot. The reason I move is that experienced players know to look at the map when they are killed to see the location of the player that shot at them. By moving, I stay alive longer.

When CP allowes it I order in 2 or 3 launcher crates on my position. Sometimes I move to a more secure location before calling them in. Keep in mind, bring right next to the create is highly advantageous since you can switch gear quickly based on what you want to shoot. In this way I can play both sniper and AA and AT for my squad.

As an AI runs out of rockets (they have 3) I place them on Hold Fire (I don’t want them shooting their rifle) and plan to replace them with a fresh airdrop at a later time (based on security, position, and rockets on hand). I also set the next unit to Open Fire.

Since the most valuable aspect of operations behind lines is the position you have earned starting alive to fight is critical. It is better to run from a legitimate threat and rebuild once you have attained security than to die and have to invest the time and CP in getting to that position again.

When I face counterattack I have to make a decision: resist or retreat.

If I’m going to resist I typically do the following:

If I’m going to retreat I try to save my squad by getting them to secure positions ASAP once the counter attack is identified. Typically some number of units will be taken out. Once the counterattack is over I redeploy.